April 26, 2022
Easter weekend 23rd and 24th March 2022 was the 2022 Hooton IKR round 3 event at Hooton park.
The format was just the same as the last weekend and as with CKC, Saturday practise and then Sunday race day. Again, being a member, it was £45 for the practise and £55 for the race and transponder hire. 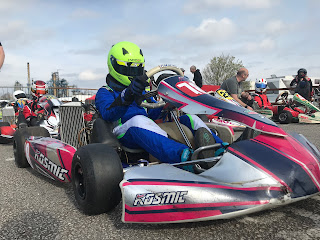 This weekend we had managed to secure the use of an Ifor Williams BV85 trailer. Dad had a pair of ramps that he modified so that they can be spread across the beams to take the kart. We calculated that the car could tow the trailer providing we did not over load it. 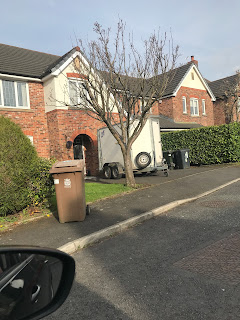 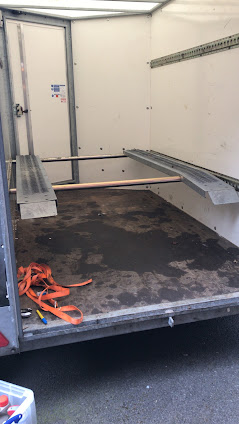 The weather was amazing, even better than the last IRK, no forecast of rain and a great outlook for the whole weekend, although slightly cool in the morning the afternoon were almost tropical.
Upon arrival we saw that it was not as busy as last time. I guess with it being Easter weekend many may be staying home or even going on Holiday as this session was midway though our half term break.
We set up towards the end of the paddock, a good walk from the pits, a chance to get my step count up. Again, on the concrete area we put the trailer against the fence and fastened the gazebo to it. It was a very comfortable set up. 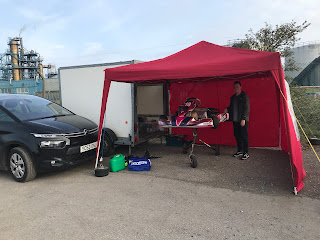 Grandad even brought a power screw driver and screwed the feet to the floor making it the sturdiest set up so far.

The kart was prepared the day before for the most part, just the tyres to pop on and we paid a visit to Dave at Modus for a new chain and 75 tooth sprocket - just to be sure.
Tyre pressures were all set to 11psi on the very used Mojo D2's as this seems to be the best pressure for a cool morning at Hooton.

Arriving on time for once, we chose a grid position towards the back of the dummy grid and by 10am for the first practice of the Hooton IKR. The session wasn’t anything impressive although I got a low 37.25 which is good for me, I was still half a second of my pace. 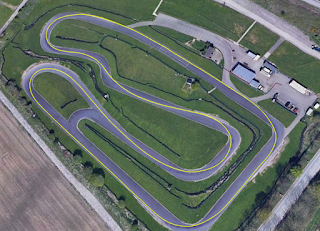 The session was once again cut short with the chain coming off which was very frustrating but it was on the last lap as the session ended. After  returning to our paddock space, we realised that the axle had slightly moved so we spent the time fixing it into place.

What a great session! Another personal best on Lap 10 of 36.638s. I could tell by Lap 3 my tyres were on form and I had good grip. Prior to the session I was watching the seniors around the final corner and found that they were turning in tighter on the second to last bend so I tried that approach and managed to get my PB. Personal Best Racing line - Hooton Park
Below is the track from the first practise and my personal best, the yellow line is the personal best at 36.638 against the red line at 37.25. A little drama this session, on lap 6, two karts came together and one lost his radiator spilling the contents all over the track, just in front of me, on the following lap, I hit the wet patch which caused me and many others to spin off. The session was cut short whilst the track was cleaned. Once I was allowed back on track, I was able to drive it back to the pits. Only Managed a 37.626s lap on lap 5 but it could have been a good session if I could have continued.

P5 was relatively uneventful, went a little wide on the outlap and did some grass cutting but managed to get back on track. 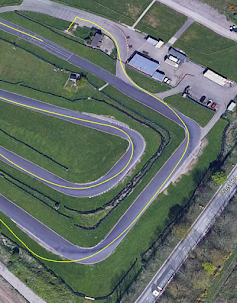 Each Lap I was getting quicker and quicker but still didn't reach the 36's. We had tried a smaller sprocket but this didn't seem to much other than to slow me down.

Keeping the line tight on the second to last corner seems to be doing the trick. Just need to work on the other corners now. 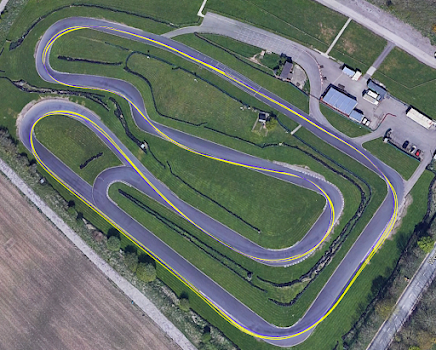 End of the day

We packed the kart up in to the trailer and locked it up and set off back home for the night. Unfortunately Dad missed the Junction for the M56 and headed up to Chester to the next junction - he was too busy talking strategy thinking he knows it all.
A great day and all ready for tomorrow.

We were up early for the drive over to Hooton, its much quicker when we are not pulling the kart so got there relatively stress free and early. We set up the Gazebo/awning and got to work on the kart.
The tyres were changed to the "one meeting old" Mojo D2's and made sure all nuts and bolts were tight. doing things on a budget we couldn't afford a new set of tyres this round where most other had changed to the Vega slicks which apparently are 1.5s a lap quicker. This is going to be interesting.

The practise session is only a short 3 minute session. It really for the organisers to check the transponder is working and assigned to the correct kart. There were no dramas, and no records were broken. 37.857 was the quickest lap I set but there was still no heat in the tyres and I was slipping about all over the place.

Qualifying was bad, if you read the last blog post you would know that was bad but this was worse.
These sprint races are won and lost during qualifying and you can really only expect to gain or loose a couple of places from where you qualify. That said, Qualifying almost dead last is a really great way to make a good start to the race! 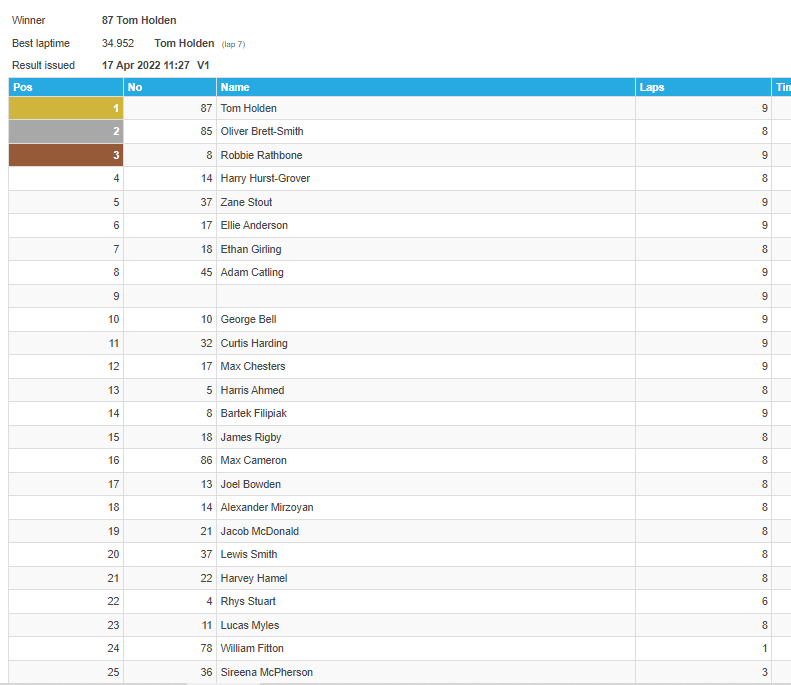 On the opening lap I was in the middle of the pack hoping to follow some of the quicker ones and stay away from the slower ones. Dad says the added pressure changes my driving style for the better.
It all seemed good and the kart felt fine. I was overtook a bit by some of the quicker karts towards the back but in general holding my own and settling in to push hard.
Getting round to the last corner of the first lap someone had spun and someone dive bombed me on the inside so I couldn’t turn or carry on straight so my only option was the grass. Miss judging the speed I ended up towards the end of the run off but I was beached.
With no Marshall in sight I switched of the engine. Luckily someone watching saw and came and helped although by the time I was back on track I was already missing half a session.
Big thanks to the person who helped but I had no time to waste I drove quickly to get some heat into my tyres ended up doing 2 laps and only getting a 39.302 second lap. But there was still half a session you may ask, yes you would be right but on that second lap on that same corner someone dived down the inside as I turned went into the side of me. I was ok and mostly so was the kart but the fact I had a new neck rest being a tyre and a fence I had no option other than to leave the kart and retire from the session completing a whopping 1.9 laps setting a 39.302 second time.

Again a very disappointing heat, having made my way up to P16 by the end of lap one, My chain came off on Lap 5 and I had to retire from the race. Gutted is an under statement. 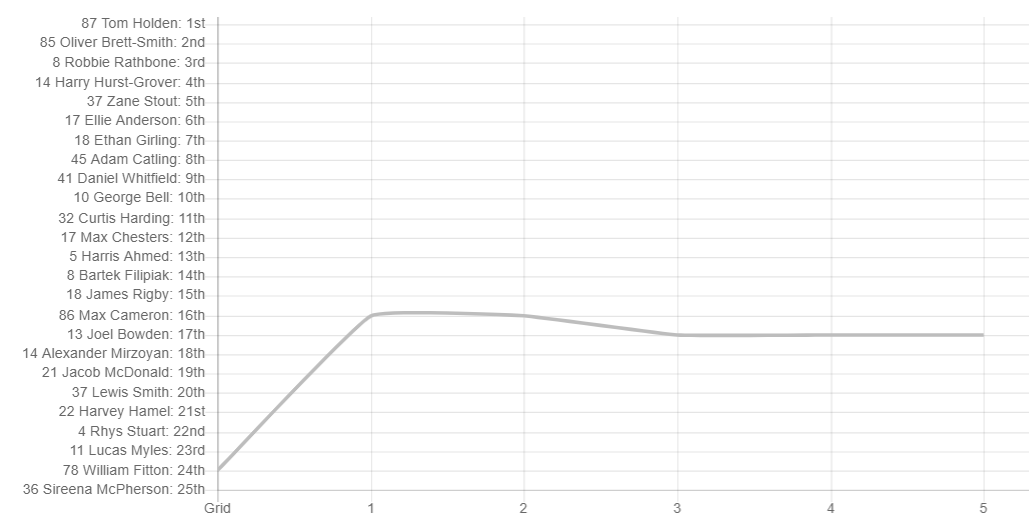 Well what can I say, plagued with issues yet again and another DNF!!
Starting at P19, I lost a couple of places on the first corner, as I am still working on the rolling starts.
Struggling with pace felt the Kart bogging down after a corner and people would just pull away no matter what I did through the bed. It was very frustrating.
Pushing too hard on Lap 9, the penultimate lap, into corner one, I ended up wide and hit the tyre wall ending my race.

I FINISHED A SESSION!!!
Yes, I actually made it wto the end of a final. Extremely happy with my result in the final.
Starting in P17, I manage to gain 1 place however, this was due to a crash that took out quite a few of the leaders. Once again, on the first corner I lost my positions and ended up at the back. I don't know what it is, something I really need to work on. Dad says i am too polite and let people through.

Well once again it was an eventful weekend and we were plagued with mechanical issues but we managed to achieve a personal best and finish the final so a Win Win for us.
One thing we have noticed during packing up is that the clutch drum is cracked. It looks like the clutch has been slipping as you can see burn marks on it. Looks like a trip to Zip north is due. 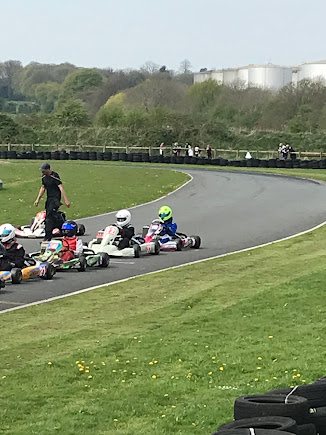 Kart Spares on/day or before session:

This weekend wouldn't have been successful without the help and support of quite a few people so I just want to thank:
Mum - For Absolutely everything, from lunches to support!
Dad - for making it all happen.
Modus Motorsport
Hooton Park
Matty Street from X-Kart
and a big thank you to my sponsor Wightman Stewart
https://results.alphatiming.co.uk/hootonik/