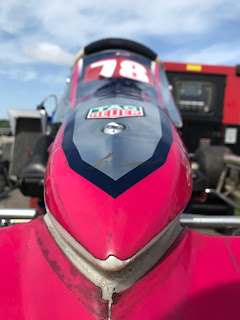 The weather for Saturday was great, sun all day but the forecast for Sunday showed rain. As it turned out, Saturday was HOT HOT HOT which did affect the performance somewhat, Sunday, Although forecast rain was amazing and again HOT. After heat 3 though there was a little rain, not enough to wet the track but enough to cause a stir in the paddock.

Setting off earlier than usual, as we were picking my class mate up Christian, we arrived just after 8am. All down the tarmacked part of the paddock was taken so we found a spot next to the rail on grass just behind HHR Racing. 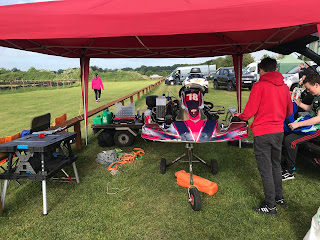 We had a good view of the track and not to far from the pit entrance. What we found being based here is that we could see more of the other classes race and enjoy the sport as a spectator as well as a competitor.
The Kart was set up to a dry setup with the tyres at 12 psi, to begin, we had a 128  Jet in as recommended by the Rotax app.
We changed the tyres back to an old set of used Mojo D2's for practise. We have contemplated using the two weekends old "race tyres" all weekend but thought against it.
As perusal, the rich kids were on all new Vega's meaning i am already on the back foot.
Sponsorship or Donations welcome:
The fuel was topped up which meant a trip to Dave at Modus for a bottle of Silkolean KR2 Race oil.

First time out and the thrill hit me. Still the acceleration is breath taking.
As the tyres warmed up, I was sliding about a bit, it turned out the tyre pressure were slightly too high at 12psi and they overheated.
Another issue I experience was the idle screw had been disturbed and the idle was very low. i spun off a couple of times and struggled to get the revs up, the engine bogged down. Finally, It just gave up towards the end and I couldn't re-join the session
Quickest time was 36.9 seconds. I did notice that the new clutch was massively different and the Kart pulled much better. 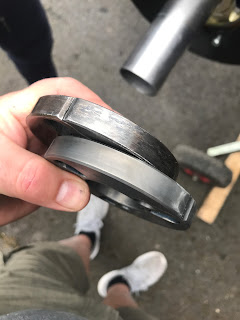 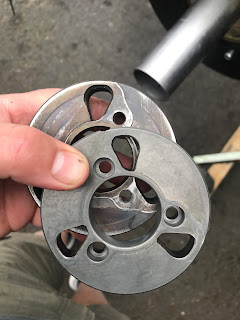 We increased the idle speed prior to this session and the tyre pressures were dropped to 9psi.
It was a steady session, I now had grip but still off the pace. It could be because its very warm. 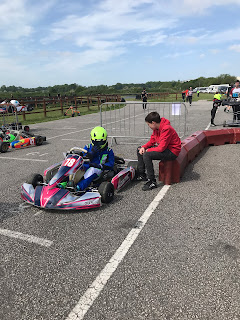 Advice from Cat Racing Services racing team, we changed the rear sprocket to a 77 tooth. With the 75 tooth sprocket we were low on the revs, highest were about 12,800 and the lowest was about 6500 coming out of the hairpin. Changing the sprocket saw the low revs reach 7000 out of the hairpin and about 13500 at the end of the straight. Cat Racing Services, stated that the target for the junior Rotax was 7500 out of the corners and 14,000 at the end of the straight. There are 2 ways to achieve this, 1. Drive the Kart faster round the corners or 2. change the gearing.
Cat Racing Services also took a look at my driving and told me that I am good when behind someone, on the line, braking and pushing hard but when I am  on my own, I seem to struggle to be consistent. Dad has also said I perform better when I am with other karts.They said that there is still plenty of potential in my driving before we begin to look at the kart for more time. I need to be smoother and hold the wheel steady round corners.
It's very hot now, and a lovely day, the kart is sticking to the tarmac and you can hear the tyres rip as its lifted off to be put back on the trolley.
Only manged laps in the 37 seconds.

Not much to report on this session. Prior to going out we increased tyre pressures to 10psi, managed the quickest lap of the day so far at 36.7.

Prior to this session we decided to play about with the Main Jet, we were running a 128 as recommended by the Rotax app. Numerous people said it needs to be about 2 sizes smaller than what is reported by the app so we changed it to a 126. We also increased the pressures to 11psi in the tyres.
Lap times for this session were consistantly in high 36's. Still not reaching the personal best but the best so far.
.
Driving a lot smoother now but still need to keep the revs up in the hairpin as they are at 7000, they should be 7500.
Corner one I’m quick round but feel could be quicker. Still struggling to maintains full throttle round the chicane and the final bend is still a little sloppy.
I came round one corner a littel wide and mounted the kerb, this caught my new front chassis protector  which bent it under the chassis damaging the floor tray so after the session we took it off and bent floor tray back in to position.

Not a great session, we changed the battery to a fully charged battery but it appears it wasn't full. I guess I must have forgot to charge it. When we got to the dummy grid and given the green light - CLICK - Nothing. Dad raced back to the awning and got another and changed it and vrooom off I went.
Because I was late out, I was in a bit of a flap and made quite a few mistakes. Spinning, too quick in the corners, etc.
Lets just forget this session....

Started packing up realised there was another session, not often you get 7 sessions in one day.
By now the track was very hot,  but I still managed to get my quickest lap of the day.
Only 5 karts on track for this session. Many had finished and started up the BBQ's.
We packed up and left the Kart with Cat Racing Services - Thanks guys for your help today!

Up at 6, and headed off to pick Christian up. We were both tired today.
When we got to the track we went for a track walk. It had forecast rain today and it had rained during the night and the track was damp. A few puddles had formed and I was a little concerned on what tyres to use, wets or dries. Dad told me not to worry and that the track would dry out - he was right as usual. 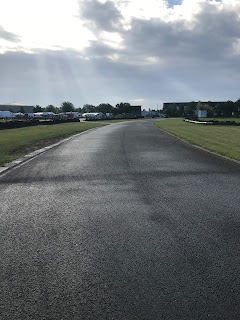 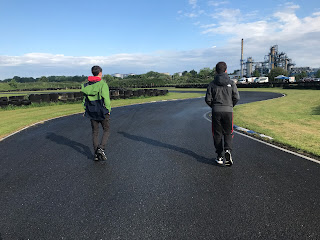 The practise session is only a short 3 minute session. It really for the organisers to check the transponder is working and assigned to the correct kart. There were no dramas, and no records were broken.
The track had dried out and it was good to be back on the grid. If this has been a qualifying session I'd have been in 11th position. 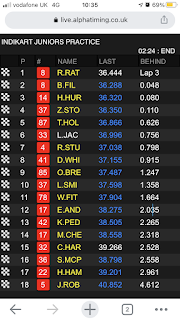 It s all or nothing in qualifying. I was hoping that the position in practise was going to be how the day would start, unfortunately, everyone again was on new Vega's against my very used Mojo's I gave it everything I had but only managed to qualified in p16. Another example of money wins races. Dad says he will buy me a new set of tyres for the next race. Donations are welcome as a set of Vega's are £250.

I managed to gain 2 positions after the first corner then lap 3 and 4 lost a position on each. Tom Holden and Max Chester had a crash on the inner part of the track, unfortunate for them but it made me finsh in P15, one position better.
The Start....
Manged the quickest lap of the weekend on the final lap of 36.669.
Results here

Started the session on a 76 tooth to try and give me more speed at the end of the straights. I as achieving 66mph but the leaders were 68+. I hope the smaller gear would give me a better top speed.
a lot of action around the field in this session, Starting in 15th, I lost 4 places on lap 4 but managed to claw back to P1 before losing the position to No 22. It was a great battle and it came down to the final corner. One more lap and I think I could have got the position back.

Fromm heat  the weather had turned, there was a bit of panic in the padock about whether to change to wets or not but the rain didn't progress from a very brief flutter. We stuck with the Slicks.
Unfortunately the session was cancelled due to an accident with the Cadets. A Kart had flipped and the ambulance was called.  I hope the driver was ok.
We packed up and headed off home, tired, sunburnt but happy after a good weekends racing.

Kart Spares on/day or before session:

This weekend wouldn't have been successful without the help and support of quite a few people so I just want to thank:
Mum - For Absolutely everything, from lunches to support!
Dad - for making it all happen.
Modus Motorsport
Hooton Park
Cat Racing Services
Matty Street from X-Kart for Compressor use.
and a big thank you to my sponsor Wightman Stewart
https://results.alphatiming.co.uk/hootonik/
round 4 Hooton IKR 2022